Putting Visuals Into Words: How to Use Words to Describe Design Aesthetic

We're Ashore, and we've built the most powerful proofing software in the world. Create your free account and start sending proofs today. Watch a Demo or Start here →

Finding the right words to describe design aesthetic is a difficult task when we can’t even agree on what aesthetic is. People toss around the word ‘aesthetic’ to describe everything from Instagram posts to mountain ranges; generally speaking, when we use the term aesthetic, we’re saying that something is visually pleasing. And while that definition is certainly correct, it’s only half of the story. Aesthetics are more than just pretty things; they’re a pivotal component of design.

However, while many equate the two, aesthetic is just a piece of design, not the design itself. As Steve Jobs once said, “Design is not just what it looks like and feels like. Design is how it works.” Aesthetic, on the other hand, is all about the look and feel. It focuses on the work’s intrinsic qualities, how our brains interpret the piece as beautiful, ugly, or somewhere in between.

To sum it up: Aesthetic + Functionality = Design

The power of aesthetics is staggering; look and feel can determine the success of a design almost instantly. In those first few moments of observing a work, our gut feeling dictates our attitudes towards it, and those attitudes can be long-lived. We constantly see this play out in the business world. When two equally effective products go head to head, the more attractive one wins out almost every time. Part of this is due to the user experience; a beautiful design is intuitive, which enhances functionality. However, we’re primarily drawn to beautiful things because of our wiring; the human brain loves a good aesthetic.

The Science Of Design Aesthetic

Aesthetics are at the core of virtually all art forms, but it’s science that draws us towards the visually pleasing. According to Scientific American, neuroimaging studies have shown that “the brain areas involved in aesthetic responses to artworks overlap with those that mediate the appraisal of objects of evolutionary importance, such as the desirability of foods or the attractiveness of potential mates.”

Specifically, we see increased activity in the anterior insula, a small section of the brain that controls interoception and visceral responses – it’s what gives us that gut feeling. This overlap between aesthetics and survival implies that there is some evolutionary benefit to beautiful things; we are attracted to beauty because, in some way or another, it has enabled us to survive.

Why We Lack Words To Describe Design Aesthetic

Calling the Mona Lisa “good” is a terrible description; it says nothing because it could mean almost anything. Yet often, that’s the best description we can muster up. There’s a reason advanced art classes cover how to talk about design – it’s extremely challenging. If artists themselves have trouble describing visuals, expecting clients to have the words to describe design aesthetic is a big ask.

Describing a design is difficult enough as is, but finding the words to describe design aesthetic adds another layer of difficulty. Aesthetics are at least in part about the feeling a work evokes, which can be difficult to describe in concrete terms. This is partially because language itself is limited; we don’t have a word to describe every experience. And even if there is a word to describe an experience, there’s no guarantee that word is in the language one speaks.

The Swedish word fika, for instance, translates to ‘coffee break’ in English, but that translation barely scrapes the surface of what fika really means. Fika is both a state of mind and a ritual, it’s about taking a pause to socialize and bond with colleagues – there’s an implied air of importance the English translation can’t convey.

Another reason we lack words to describe design aesthetic is that language isn’t universal – even when people are speaking the same language. The connotation of a word is often subjective; the meaning can differ significantly depending on an individual’s age, experiences, and geographic location. Another barrier to communication is industry-specific terminology. For instance, a designer may think of the word “hex” as a six-digit number representing color, while a non-designer may picture witchcraft. Of course, context certainly helps in these situations, but it can only do so much.

There’s More To Communication Than Words

Sometimes, it’s difficult to find words to describe design aesthetic because words can’t adequately communicate what we are trying to say – a great deal of communication occurs between the lines. Many believe that 55% of communication is body language, 38% is the tone of voice, and 7% is the actual words spoken. While those numbers are hotly debated (and possibly debunked), most professionals agree that at least some percentage of communication is nonverbal. When it comes to describing aesthetics in particular, words often aren’t enough – they can’t fully encompass what makes something beautiful (or not so beautiful).

While language has no shortage of limitations, there are ways to describe visuals with words better.

Utilize The Principles Of Design

People often use overly generalized, ill-fitting words to describe design aesthetic because they don’t know the word that they are looking for. In those cases, it can be helpful to return to the building blocks of art and design. Depending on the source, what the design principles are can vary; regardless, these principles are a great place to seek inspiration when describing a visual work.

Balance: Every element in a design holds weight; thick lines, dark colors, large objects, and groups of objects are visually heavier than thin lines, small objects, etc. A design is balanced when there is an even distribution of weight throughout the layout.

Emphasis: When an element draws attention, it has emphasis. Strong designs typically emphasize the most important elements, such as the name of a band on a flyer or the title of a novel.

Repetition: Repetition is when there are multiple instances of one element. Repetition can be used to bring a sense of unity, create patterns, or add movement.

Hierarchy: Hierarchy is somewhat like a ranking of importance; in a strong design, it’s the order in which the eye looks at different elements on a page. Hierarchy can be created through size, weight, contrast, and emphasis.

Contrast: Contrast is the difference between elements in a design, and it can be used to create emphasis. Contrast can come in the form of small vs. large, light vs. dark, heavy lines vs. thin, etc.

Unity: Unity is the harmony between objects in a design – the sense of ‘oneness’. Unity can be created through repetition, proximity, color, or shape.

Movement: The path the eye follows when observing a design is movement, similar to how the eye travels from left to right when reading.

Judgments convey an opinion, but they aren’t often useful when reviewing visual art. By referencing the principles of design, reviewers can give actionable feedback – feedback that the artist can actually implement.

In many cases, subpar feedback is due to a lack of specificity; “I don’t like the layout” isn’t nearly as useful as “the body copy feels cluttered.” If you’re stuck on how to describe a work more specifically, a great place to start is by locating where the issue lies on the page, identifying the elements that seem off, and then determining what about the element specifically needs improvement.

That being said, it isn’t always as simple as it sounds. Design aesthetic is largely about the feeling a work evokes, making it hard to pinpoint precisely what a design needs. One method would be to determine what feeling you want the piece to inspire, and compare that to what feeling it actually inspires. Once you can identify the emotional disconnect between the actual work and the ideal piece, it’s much easier to pinpoint the specific elements that need to change.

Put The Words In Context With Ashore

Despite our best efforts, sometimes, words alone can’t convey a message. When using words to describe design aesthetic doesn’t cut it, it can help to put those words in context. With collaborative proofing and approval software such as Ashore, users can attach their comments to a specific location on a page, putting reviewers in a position to point to something directly and talk about it. Ashore also offers markup tools to further clarify feedback, ensuring that everyone understands exactly what the comment is referring to.

With the right vocabulary and collaborative tools, anyone can learn to thoroughly describe a design aesthetic in useful, actionable ways. Are you ready to streamline the review process for your design projects? Sign up for your 14-day free trial of Ashore today!

We're Ashore, and we've built the most powerful proofing software in the world. Create your free account and start sending proofs today. Watch a Demo or Start here → 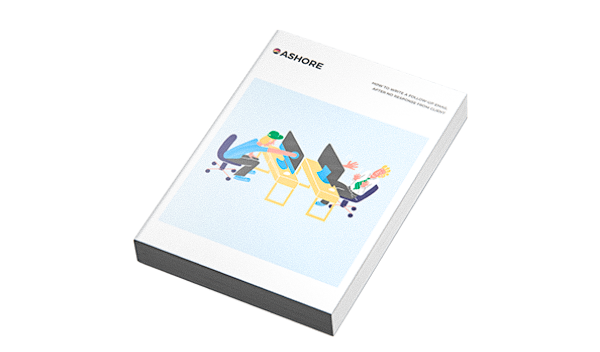 Get Responses From Your Customers 2X Faster

You can find out more about which cookies we are using or switch them off in settings.

This website uses cookies so that we can provide you with the best user experience possible. Cookie information is stored in your browser and performs functions such as recognising you when you return to our website and helping our team to understand which sections of the website you find most interesting and useful.

This option should be enabled at all times so that we can save your preferences for your cookie settings on this website.

If you disable this cookie, we will not be able to save your preferences. This means that every time you visit this website you will need to enable or disable cookies again.